Source: Woes stalk tobacco industry | Herald (Opinion) Low prices at tobacco action floors have left many farmers pondering whether or not to continue producing the crop or switch to maize whose new producer price has been revised to $4 000 per tonne Obert Chifamba Farming News Editor IT seems the tobacco industry is predestined […] 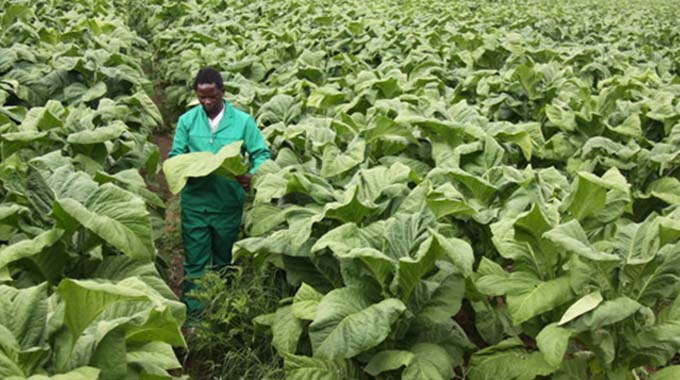 Obert Chifamba Farming News Editor
IT seems the tobacco industry is predestined to hop from one challenge to another, season after season and the streak has been going on unabated over the past five or so seasons.

This time around, after coming out heavily battered and bruised from the 2018-19 farming season, the industry seems to have entered another trying stretch that will require a reconfiguration of the methods of doing business the sector has been using, as it appears growers are running scared and opting out for other crops. And, yet, tobacco is our biggest cash crop?

Still fresh in the minds of many is the 2018-19 season that had its bagful of problems for growers, which started with the first deliveries to the auction floors fetching a high of US$4,50 per kilogramme, which was only breached by a mere 15 cents even after the season had been rolling for some time with the best leaf grades also being delivered.

At the contract floors, the highest price only reached US$5,75 and failed to beat the 2017-18 season’s highest of US$6,25 per kilogramme.

Prices at the tobacco action floors have left many farmers pondering whether or not to continue producing the crop or switch to maize whose new producer price has been revised to $4 000 per tonne, which to many is quite attractive given that the marketing of the cereal is not very cumbersome. There are also many farmers who have switched to cotton citing its attractive packages of free Government inputs that include fertilisers, seed, chemicals and even knapsack sprayers with the farmer only required to take care of the agronomy part and the harvesting and packaging.

The producer price for cotton has also been reviewed from $1,95 per kilogramme to $3 per kilogramme in a move designed to cushion producers from inflation, the Cotton Company of Zimbabwe (Cottco) indicated.

The 2019 tobacco marketing season saw a new payment being announced just a few days before the opening of the season, which resulted in many producers battling to come to terms with the new requirements.

Farmers briefly suspended deliveries and sales, as they did not understand how the half forex and half RTGS system would work, and all believed the system was designed to rip them off. It had to take numerous efforts, including visits to the floors by the Parliamentary Portfolio Committee on Lands, Agriculture, Water, Climate and Rural Resettlement to convince them that the system was not meant to rob them, but to get them delivering tobacco and selling again. It also took the schools’ opening pressures to force many of the farmers out of their resolve to hold on to their tobacco.

Merchants on the other hand also temporarily halted operations demanding that Government reconsiders the retention percentage, which would allow the merchants to take away 70 percent of the money they made and leave 30 percent in the country.

Their argument was that they borrowed 100 percent when they came to buy the golden leaf, so going and leaving a chunk of their earnings, would see them failing to repay their loans.

However, the same merchants have been fingered in a conspiracy to erect impregnable price ceilings that always leave the farmers poorer at the end of the marketing season.

In a way, these challenges and a host of others that may not have hogged the limelight, have influenced the latest developments in the industry that must be giving all stakeholders some anxious moments.

TIMB indicated that the number of farmers registering for the first time to grow tobacco had gone down by 80 percent from 36 117 farmers in 2018 to the current 7 355 in a development the board’s chief executive officer, Dr Andrew Matibiri attributed to difficulties in mobilising resources to venture into tobacco that farmers are facing, while other reasons include shortages or even lack of water for establishing seedbeds in time.

Additionally, a total of 135 998 hectares has since been put under tobacco countrywide, down from last year’s 42 010 hectares during the same period, which on the surface could be blamed on depleted water resources and electricity outages, yet most farmers that talked to this publication cited marketing hassles and poor prices as the biggest problem.

This time around, a total of 12 733ha has been committed to the irrigated tobacco countrywide, while last year a total of 16 345ha had been put under irrigated tobacco, which marks a yawning gap that should get stakeholders pondering on their next move to revive the waning interest by farmers.

The dryland crop has not been spared, with a total of 23 365ha being planted to date, while last year a total of 25 665ha had been planted during the corresponding period.

For now, the only thing to bring grins to the faces of stakeholders is the revenue generated from exports in the 2019 season, which eclipsed that of 2018.

It is refreshing to note that markets from the African continent are absorbing quite a chunk of Zimbabwe’s tobacco after having accounted for 43 487 tonnes by November 28, 2019, although last year’s figure was higher at 62 792 tonnes.