The post You said you are a listening President, so listen … appeared first on Zimbabwe Situation.

Source: You said you are a listening President, so listen … | Newsday (News) 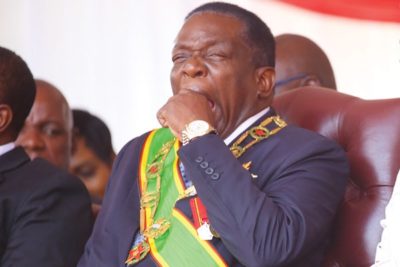 DEAR Mr President,
This is my first open letter to you Sir, President Emmerson Mnangagwa and I sincerely hope that it is received in good faith. You promised to be a listening President and I am putting your word to the test.

A lot has happened since November 2017 when you took office. I will be the first to admit that at the time, I welcomed the end of the reign of the late former President Robert Mugabe and celebrated your arrival on the scene. I was optimistic that the worst had ended, and a new season had begun.

Mr President, Sir, I gave you the benefit of doubt when you started and articles I penned in 2017 and early 2018 are evidence of this. I am not a card-carrying member of any party (I doubt I ever will but that’s for another day) and I don’t represent any party.

Unfortunately, these aspirations have not been fulfilled and it now seems that this will be nothing, but a dream. Since you have assumed office, you have clamped down on dissent in ways I previously thought to be unimaginable. You have used the “insult laws” (the charge of undermining the President) more than the former President did in his 37-year rule.

Several unconstitutional decisions have been made by your office Sir and these undermine the rule of law and the supremacy of our Constitution. Your Cabinet and government in general, have on many occasions ignored constitutional obligations and operated with impunity.

I hoped that your Presidency would be a win for constitutionalism and respect for its provisions and abiding by the duties set out in it. Again, disappointedly, this has not been the case.

Mr President, Sir, we possibly have one of the most transformative and comprehensive Constitutions in the world, but this counts for nothing if its provisions are not implemented. Zimbabwe has morphed into a highly policed State characterised by excesses of the security apparatus of the State.

The Constitution specifically requires the creation of a body that independently checks the powers of the police, but seven years later, this body has not been operationalised. It is the mandate of your government to ensure that appropriate legislation operationalising this body is tabled before Parliament, yet this has not been done.

Mr President, I applauded your move to establish the Motlanthe Commission of Inquiry into the August 1, 2018 post-election protest shootings, but its findings have been ignored. There are constitutional reasons why this would be important, but it suffices to note that you failed to uphold these in this regard, and it was a mere window-dressing exercise. In this sense, Mr President, Sir, you have let us down.

Mr President, Sir, you have the opportunity to redefine the Presidency and a chance to change the narrative by implementing the Constitution. Our Constitutional Court unanimously ruled that protests are a legitimate form of freedom of expression in our democracy and went on to invalidate provisions of the Public Order and Security Act on this basis, but this has not changed the conduct of the State towards protests.

As we move forward as a nation, we need to respect that our Constitution creates these freedoms and these are to be enjoyed by the citizenry, even where protestors are to show dissatisfaction with the State.

As a listening President, you should celebrate that people are expressing how they feel about your governance and take lessons from it. There is no need to deploy the security might of the State to crush these as it only gives the impression that your government is intolerant to divergent views, which would contradict your previous pronouncements that this is a new dispensation.

Justice Rita Makarau made an important observation in the Democratic Assembly for Restoration and Empowerment & 3 Others v Saunyama NO case, where she reasoned that protests were not only a form of expression, but also provided a form of venting for the public. When people are allowed to vent, this helps reduce tensions and escalated action. Please don’t stifle this vent. Instead, open it and allow a breath of fresh air to engulf the nation.

You may have already noticed this, but Zimbabweans are peace-loving and law-abiding citizens. We understand violent protests are unlawful and thus not worthy of constitutional protection, but there should be less State intervention in protests that are peaceful and directed at expressing genuine grievances.

History tells us that suppressing the voice of the people, and protests in particular, only frustrates people further, so Mr President, let the people speak to you in the language they feel best suited to convey shared grievances.

You are a listening President after all, Mr President, so this should be easy. Do not be afraid of the collective voice of the people you lead; all they are asking for is an ear from the President who promised to listen to them.

Give them that ear. Create a space where protests are protected and are a form of expression.

Take a cue from some of your regional counterparts who regularly allow protests and only use police to disperse those that become violent.

Mr President, Sir, something needs to be said and done about the use of the security forces to infringe on liberties as we have seen in the past two weeks.
In a functional democracy, we should not have regular Press conferences from or involving the security chiefs — we are not at war.

The constant militarisation of the State is a cause for concern. Nobody needs to remind you that blurring the distinction between civilian and military lines is what led to the “coup-not-coup” of 2017.

More importantly, your security forces seem to be free agents who cannot be held accountable when they break the law in effecting whatever responsibilities they would have been given.

No part of the State must be unaccountable, Mr President, Sir. You are their commander-in-chief and, therefore, have the ultimate responsibility to ensure that they act within the confines of the law.

I would have loved to touch on corruption in this letter, but this would take me a few pages. A lot has been said about this, but again, Sir, the question is whether you will, indeed, show yourself to be a man of your word and act.

As a parting shot, every leader leaves a legacy, but the question is what kind of legacy it is and how long it will last. For all his flaws and missteps, Mugabe’s legacy will always be that of education that continues to be a renowned trait of Zimbabweans across the world.

The important question is what kind of legacy do you want to leave behind? What will your presidency be remembered for? If I may, Sir, allow me to suggest that the implementation of our Constitution can be the greatest legacy you will leave behind if you see through the necessary reforms.

Uphold the obligations in our Constitution to start this off. Hold your Cabinet accountable, clamp down on corruption, reduce the policing of the State, allow freedoms and build strong constitutional systems that will outlive your presidency and be a legacy to your name.

It is not too late to turn back from the road you have travelled with your government. There is still a chance to salvage what’s left. The world is watching. History is watching Mr President. Fulfil the promises you made in 2017 and be the listening President you set out to be for it is only then that we can truly say Zimbabwe is open for business.

Until next time, Mr President …

The post You said you are a listening President, so listen … appeared first on Zimbabwe Situation.