Source: Zim losing US$400m to oil pipeline cartels | Theindependent (Zimbabwe) BLESSED MHLANGA ZIMBABWE is losing US$400 million annually in potential oil revenue due to Sakunda Holdings’ untenable monopoly over the Beira-Harare fuel pipeline, it has emerged. Sources in government and the oil sector told the Zimbabwe Independent this week that due to the monopoly […] 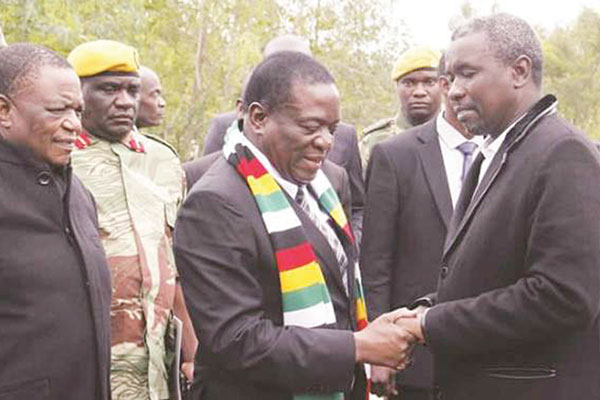 ZIMBABWE is losing US$400 million annually in potential oil revenue due to Sakunda Holdings’ untenable monopoly over the Beira-Harare fuel pipeline, it has emerged.

Sources in government and the oil sector told the Zimbabwe Independent this week that due to the monopoly by Sakunda — owned by President Emmerson Mnangagwa’s adviser and Zanu PF benefactor Kuda Tagwirei — the pipeline is being underutilised by up to 40%, resulting in hefty revenue losses.

Zimbabwe’s fuel sector, often described as opaque, is dominated by Tagwirei, who was three weeks ago accused by suspended Zanu PF youth league leaders of being part of the cartels bleeding the country.

Sakunda has interests in Puma, which is owned by Glencore and Trafigura, although recent press reports suggest the Singaporean firm had terminated its partnership with the company.

The issue is now at the epicentre of a raging political firestorm in Zanu PF and government.

A senior National Oil Company (Noic) official told the Independent the exclusive deal had left both government and other players in the fuel sector at the mercy of the cartel. Noic is owned by the state.

The source further indicated that because of the deal allowing Sakunda exclusive use of the pipeline from the Zimbabwean border with Mozambique to the dry ports at Msasa and Mabvuku in Harare, the fuel had become so expensive that fuel importers from countries like Zambia and the Democratic Republic of Congo (DRC), which used to source the commodity from local dry ports, were opting to ferry it on their own from Beira.

“The pipeline is owned equally between Zimbabwe and Mozambique. CPMZ (Companhia Pipeline Moçambique) controls the part that stretches from Beira to Forbes Border Post.

Noic is meant to control the pipeline from the border to Msasa and Mabvuku. It costs just US$0,03 per litre to transport fuel from the Mozambican side, but once it reaches the Zimbabwean side, the cost goes up to US$0,05 per litre and there is a storage fee of US$0,02 per litre which takes the total cost to US$0,07 cents per litre,” a government official said.

A Noic source, also privy to information on the oil matrix, said: “The exclusive use deal gives control of the pipeline to Trafigura, who then make other fuel importers pay them to use the pipeline.

Where fuel is supposed to land at the dry ports in Harare and Mabvuku at US$0,03 a litre, it’s now landing at a pumping cost of US$0,07. They now also have control over Noic decision-makers and the Ministry of Energy is beholden to the cartels.”

The source further indicated that the country’s dry port facilities are grossly underutilised as no one else is allowed to store their fuel there unless when leasing from Sakunda.

The dry port facility has the capacity to store 500 million litres of fuel in bond per month, but is currently just using 20% of its potential because of control by cartels, the officials said.

“Sadc countries like Botswana, DRC (Democratic Republic of Congo), Zambia and South Africa’s Limpopo region, used to come and collect their fuel supplies from Msasa and Mabvuku depots because it was cheaper to use the pipeline, but now with the control of the cartels, it’s cheaper for someone to drive their truck from DRC past Harare to Beira to load their fuel and drive back to DRC. This is costing this nation,” the source said.

Information ministry permanent secretary Nick Mangwana denied Sakunda enjoys a monopoly over the pipeline, saying the company was only recouping its investment for rehabilitating the infrastructure.

Sakunda in 2014 invested US$11 million into the refurbishment of the Beira-Feruka pipeline, and is jointly running it with Noic as it recoups its investment.

“Trafigura assisted in refurbishing the pipeline and they are recouping their money from the use. The seven (US) cents applies to Zambia and DRC because they would be collecting the fuel from here.

Suppose we contract an energy company to help us build infrastructure, when they have finished they will say ‘from your power tariffs, add the two cents per kilowatt hour which we will use to recoup the costs’ and it will be done, but it doesn’t speak to a monopoly, it speaks to a PPP (public-private partnership). It’s a variant of the BOT (build, operate and transfer). Definitely, they don’t have the monopoly,” he said.

Chairperson of the parliamentary Public Accounts Committee Tendai Biti, who is also a former finance minister, confirmed the existence of a monopoly in the fuel sector, accusing government of corruptly awarding Trafigura a monopoly in the importation of bulk fuel, thereby holding the country to ransom.

“The fuel pipeline was leased to a private player who has links with top government officials. These are now responsible for blocking the deal to construct a second pipeline. Those who have a monopoly in importing bulk fuel into the country are also retailers and those with control of the pipeline also have indigenous partners who run fuel retails in the country,” Biti said.

“Fuel in this country is basically controlled by two companies. Trafigura from Singapore does not produce fuel, why should Zimbabwe buy the bulk of its fuel from a middleman called Trafigura? So you have to break that cartel. Then you have the pipeline controlled by Glencore, that’s a monopoly, this is just corruption,” Biti said.

Contentions over control of the pipeline prompted some senior Zanu PF officials and businesspeople to consider the construction of a second pipeline on the same route in partnership with Mogs.

As such, the issue has since become a source of fierce Zanu PF factional wars, with some senior officials accusing politburo member and former adviser to Mnangagwa, Chris Mutsvangwa, of fomenting divisions after government refused to sanction the deal.

However, in an interview, Mutsvangwa denied any links to Mogs, saying these were lies being propagated by Tagwirei’s affiliates.

He also alleged that the deal was being pursued by the military and was being pushed through by the Zimbabwe National Army (ZNA) business division as far back as 2015.

“All balderdash; sniping by monopolistic moguls that have been caught out and exposed. The Ministry of Defence Special Business Unit will tell you that it introduced the Mogs pipeline project as far back as 2015. The pipeline project had been orphaned of cabinet support … so I ended up rooting for Mogs in Mugabe’s cabinet because I appreciated its strategic importance,” Mutsvangwa said.

“All said, when a business practice that is tainted with rapacity collapses under public glare, culprits should not resort to gratuitous and baseless finger-pointing. Trafigura did the right thing to recuse and safeguard its threatened global business image. They have demonstrated honour far beyond that of their divorced Zimbabwe partners.”

Moyo could not be reached for comment as calls to his mobile number went unanswered.

Mangwana said the Mogs deal had stalled because government had approved only a feasibility study for the construction of the second pipeline, but was facing resistance from Mozambique which argues that it is not necessary to come up with another pipeline when the current one is underutilised.

“Mozambique is arguing that there is no compelling case for the construction of the second pipeline because of the underutilisation of the existing one. A feasibility study has been commissioned and the process is currently underway,” Mangwana said.

Noic chairman Daniel Mackenzie Ncube refused to comment on the developments, saying: “I don’t do national deals in the press, why don’t you let us finish the work, have everything in place and announce when all paperwork is concluded? We are seized with ending the intermittent fuel supply in the country and cabinet is giving us its support.”

Energy minister Fortune Chasi had promised to respond to questions on the Mogs deal and the pipeline exclusive use deal, but was yet to do so at the time of going to print.

Sakunda boss Tagwirei did not respond to questions sent to him yesterday.