The post Zimbabwe thanks India for Covid aid; President says ‘your donations touch our hearts’ appeared first on Zimbabwe Situation. 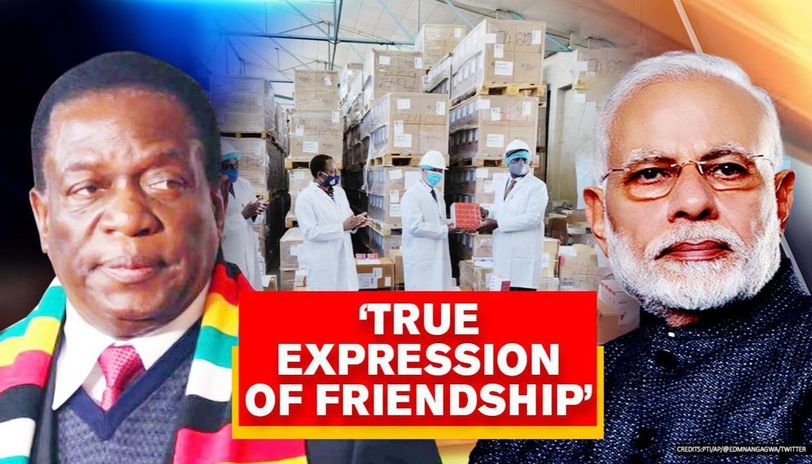 The President of Zimbabwe Emmerson Dambudzo Mnangagwa expressed gratitude to India for its aid to the nation in fighting the coronavirus pandemic and hailed the relations between the two nations as a ‘close expression of friendship’ between the two countries.

In an effort to help Zimbabwe boost its fight against the COVID-19 pandemic, India sent important medicines to help the African nation. Taking to Twitter, the President of Zimbabwe thanked India for the donations and said that it ‘touched their hearts’. Sharing a picture of Zimbabwe receiving the consignment, Mnangagwa called the gesture as an expression of close friendship between the two nations.

The African nation has reported 698 cases of coronavirus thus far with the cases seeing a steep rise from the end of May. 181 patients have recovered so far while eight deaths have been reported as of July 5. earlier this week, Zimbabwe allowed some relaxations in the country — allowing national parks and restaurants to reopen as the country’s hospitality sector is struggling from restrictions to combat the new coronavirus.

The government’s decision, announced by the Information minister Monica Mutsvangwa, came amid an outcry from the national parks and private safari lodges that the continued lockdown was endangering both businesses and conservation efforts. Restaurants will be allowed to serve meals to sit-in customers, but only with limited numbers, Mutsvangwa said. With international travel restrictions, there have been virtually no tourists from North America, Europe or Asian countries that provide most of Zimbabwe’s tourists. The national parks are concentrating on domestic tourism in the meantime, said Tinashe Farawo, spokesman for the Zimbabwe Parks and Wildlife Management Authority.

India’s total COVID cases, as on July 4, rose to 648,315 of which 235,433 are active cases while 394,227 people have recovered. 18,655 people have died so far. The lockdown has been extended until July 31 throughout the country, with the Centre and the state governments offering some relaxations to help the country to inch back towards normalcy.

Indian Council of Medical Research (ICMR), on Saturday, issued a press release assuring that they are committed to treating public safety as the topmost priority. Explaining that Bharat Biotech International Ltd’s (BBIL) vaccine appears to be promising, ICMR is expediting clinical trials (phases 1 and 2), as allowed by Drugs Controller General of India. Moreover, ICMR said that the process followed by the apex medical body is in ‘accordance with the globally accepted norms to fast-track vaccine development’. India currently has 6,48,315 COVID-19 cases, of which 2,35,433 are active, 3,94,227 have recovered while 18,655 have succumbed to the pandemic.

The post Zimbabwe thanks India for Covid aid; President says ‘your donations touch our hearts’ appeared first on Zimbabwe Situation.