One year into the administration of Zimbabwe’s President Emmerson Mnangagwa, there are mixed indicators for the prospects of growth. Source: Zimbabwe’s President Mnangagwa: One Year Later | Global Risk Insights     Following the ousting of late President Robert Mugabe, Zimbabweans hoped for a real change. One year into the administration of his successor Emmerson Mnangagwa, there are […]

One year into the administration of Zimbabwe’s President Emmerson Mnangagwa, there are mixed indicators for the prospects of growth. 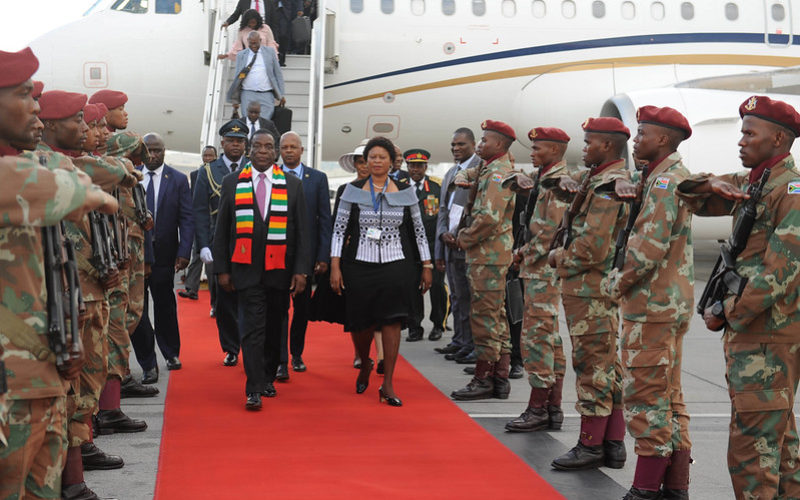 Following the ousting of late President Robert Mugabe, Zimbabweans hoped for a real change. One year into the administration of his successor Emmerson Mnangagwa, there are mixed emotions; while macro indicators indicate Zimbabwe’s economic troubles are slowing, there are few signs of the necessary paradigmatic change that needs to occur for significant growth.

A replacement or change-maker?

On the July 30th, 2018, Zimbabwe had a historic election in which Robert Mugabe was ousted after his 37 years in power. Emmerson Mnangagwa assumed the office of President under the Zanu-PF party on November 24th with 50% of the vote, defeating Nelson Chamisa (Movement for Democratic Change Party). Mnangagwa posed himself as someone who would bring an end to the hard times, re-engage with the international community, and open the country for business. Following this transition of power, Zimbabweans were hoping their country could usher in a new era of prosperity.

Mnangagwa pursued policies to open Zimbabwe for business, including abandoning its indigenisation policy, which requests businesses with over $1 net asset value to cede 51% equity stakes to Indigenous Zimbabweans. This policy made the investment in Zimbabwe comparatively unattractive, according to the foreign minister, discouraging foreign investment. This move is estimated to benefit the platinum and diamond mining sector in Zimbabwe, which would generate important growth; the mining sector in Zimbabwe is second only to South Africa in the region.

A World Bank estimate projects an additional 1 million people entered extreme poverty in 2019. Unlike the natural agricultural boost in 2018, this year has seen a steep rise in the price of basic commodities and food due to droughts. Overall, food and non-food prices inflated 319% and 194%, respectively, in July 2019. Ibbo Mandaza of think-tank Sapes Trust told Al-Jazeera,

“We are now faced with a far worse political and economic crisis characterised by power shortages, rising prices, currency crisis and fuel shortages.”

Mnangagwa has attempted to cut government spending and increase tax revenue; however, these austerity measures have not been widely popular. Finance Minister Mthuli Ncube also introduced the Bond note as Zimbabwe’s currency in order to address the continued repercussions of the 2008/2009 liquidity shortage due to the financial crisis.

Private-sector development is still limited in Zimbabwe and hindered by lack of investment regulation, high input costs, outdated machinery, and inefficiency in the bureaucracy. With young people making up 36% of the population, unemployment is high at a projected 8.13%. However, the proportion of young people in a country speaks to the potential economic productivity of a country in the future.

However, many of these issues predate Mnangagwa’s term. Following his election, the economy performed relatively well, largely as a result of relative stability and agriculture productivity. This small economic boom was due to consumer confidence from a relatively peaceful election. From 2017 to 2018, the fiscal deficit went down 1.8% of GDP owing to domestic borrowing, and total external debt was down 8.5%.

Despite these obstacles, Zimbabwe is projected by World Bank estimates to contract by 7.5% in 2019, but pick up by 2.7% in 2020. While overall, indicators point to Zimbabwe having decent potential to overcome its historical economic shortcomings, it still faces difficulties in the short run. These include their currently unsustainable debt-to-GDP ratio, cash shortages, rigidity in conducting a foreign exchange, bureaucratic ineffectiveness, and other critical shortcomings remain obstacles for Zimbabwe to overcome.

With just a year into his election, it is still too early to tell what large dent he has made in the everyday socio-economic struggles of Zimbabweans. Mnangagwa still faces the problems of making up for Mugabe’s ostracization of international investors and economies. However, the economic trends point in a positive direction for future Zimbabweans. The greatest determinant of short term growth will be both foreign and domestic confidence in Mnangagwa and his ability to make substantial reforms. And on this front, it would certainly not hurt him to make a more concerted effort to emphasize the message that Zimbabwe is open for business.

Zimbabwe’s hard times are far from over. However, macroeconomic indicators point to what might be gradual growth for the country, with trends in inflation and poverty slowing or reversing. Mnangagwa said he was a man of change that would ultimately change Zimbabwe for the better, and despite the challenges it fill face in the short run, the long run is indeed promising. Conditional on substantive policies on openness to trade, continuing peaceful and truly democratic elections, and better fiscal policy, the country is likely to experience real economic growth over the next decade.